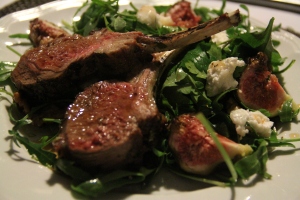 Adapted a bit from Ramael Scully’s recipe, the original can be found in the book ‘Ottolenghi’.

2 racks of lamb totally 16 cutlets, French Trimmed; ask your butcher (add 8 more if you think you have very hungry guests or aren’t doing a starter)

Leaves from about 10 sprigs of fresh soft thyme, roughly chopped

about 200g, or one large bag of Rocket (or Arugula)

Leaves from 5 stalks of mint

A good tablespoon of your best olive oil to finish 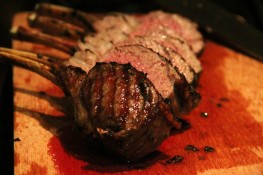 Prepare the sauce.  Place all the ingredients in a heavy bottomed pan and bring to the boil.  Reduce the heat and simmer gently, stirring occasionally, for about 20 minutes or until reduced about a third and thickened.  Skim off any dark froth as you go and turn off the heat when the bubbles of boiling liquid are clear and glossy and the sauce is resembles the colour and consistency of light maple syrup.  Remove from heat and leave somewhere warm.

Place the walnuts in a non-stick pan and gently toast over a medium heat for a few minutes until a little brown.  Set aside.

Shortly before serving, heat up a barbecue or griddle until piping hot and turn the oven on to 250.  Season the lamb with salt and pepper and place on the griddle for 3-4 minutes each side, not forgetting the bottom, for rare-medium.  When well browned, place on an oven tray and put into the oven for a further five minutes (longer if your guests like theirs well done).  Remove from the oven and leave to rest in a warm place while you compose the salad ingredients.  Toss together all the leaves and walnuts with olive oil, a little salt and pepper and plate up.  Then arrange the goat’s cheese and figs so that they are not too hidden and so that the cheese doesn’t smear the leaves.

Carve the meat and rest pairs (or triplets) of cutlets against the salad.  Spoon over a little of the warm sauce across the meat and a more generous amount over the figs, cheese and leaves.  Serve immediately.

By the way, if you have vegetarians turning up at the last minute, simply toast some slices of baguette, then rub with a little olive oil and garlic.  Pile some goat’s cheese on top of the bread and grill until golden.  Plate toasts on top of the green leaves (leaving out the goat’s cheese from the salad), place roughly torn quarters of figs on top of your golden goat’s cheese bruschettas and drizzle generously with the spiced orange sauce.