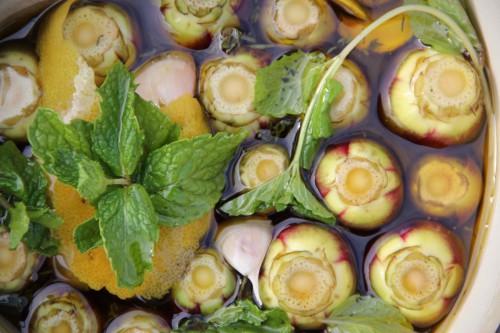 Life is busy at the moment.  The Teaching Kitchen is alive with chatter, chopping, questions, learning and eating. Heirlooms & Wooden Spoons is no longer just a sporadic blog, but a living, breathing cooking school in the heart of Seattle. 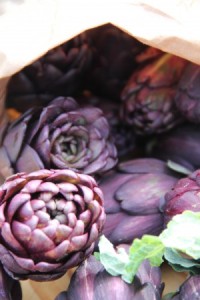 The last few months have included cheese making with kids, knife skills for the nervous, chocolate making, recreating favourite recipes from Yotam Ottolenghi’s Plenty, and dinners.  Lots and lots of dinners. Demonstrating the art of Tagine making in the Atrium Kitchen in Pike Place Market last week was a highlight. The electricity created by the hustle and bustle of the Market is infectious.  Showcasing produce from my favourite suppliers, my favourite season, in my favourite Seattle spot, surrounded by old friends and new was magic.  Just magic.  Having my son help hand around Harissa filled me with pride.  It is official – H&WS is a family business.

But this is about Carciofi.  Or carciofini to be precise.

My husband despairs of me at times, and when I come home with a large grin and an armful of tiny artichokes his eyes roll into the back of his head just a little more than usual.  For me, these gorgeous little gems signify that summer really is coming.  In fact, that somewhere (namely Italy) it has already warmed up enough to produce these spiky little edible flowers. My husband is known for many things. Patience is not one of them.

It is true that this is not a dish you can whip up for a quick and easy supper, in fact, it will take you a lot longer to make than it will to eat. And so, I savour every moment of preparation, knowing that every second spent handling these precious purple flowers will be worth it the moment I pop it into my mouth.

Years ago, working at La Fromagerie, I would spend literally hours happily turning, trimming and packing them, as the hustle and steam of the kitchen simmered around me.  Once prepped and on the stove, the terror of over cooking, crisping, undercooking or, God help me – burning them – was palpable.  Not just the cost of the raw ingredients (a crate or two of baby carciofi, a couple of litres of Olive Oil) but also the time it had taken were at stake. I still feel the fear in the pit of my stomach.  A fear only quenched by filling it with the end result. Artichoke confit is something I look forward to making every year. Go on. I dare you.

Not really a Recipe…

Take as many artichokes as you can carry/afford. carefully cut off a little of the bottom and peel the excess tougher outer petals off.  Trim the tip of the petals and place in a heavy bottomed pot or oven proof dish bottom up.  Pack them in tightly but don’t totally crush them.  Pack half of a lemon, whole garlic cloves, a few bay leaves, a couple of chillies and plenty of fresh mint in and around them.  Scatter a few peppercorns and sea salt and then pour over good olive oil until the are virtually submerged.  Cook stove top very gently until soft, or in the oven, not too hot, again until just soft.  Squeeze the cooked lemon and soft garlic over the artichokes, add more fresh torn mint, and salt to taste. Eat straight out of the pot once cooled down a little with a cold glass of dry white.  Ideally with the sun on your face. 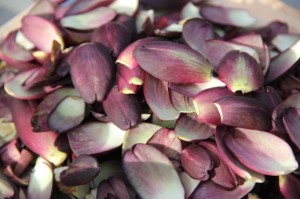 Filed under Everything!, Spring Recipes

I was told recently that cupcakes were passé.  I was informed with enormous conviction by a ‘food trend analyst’ (yes that job really does exist) that they had had their day… and I wondered where this person had been for the last 30 years.  Cupcakes have not had their day.  They are simply going through what I refer to as a ‘Jamie Oliver’ moment.  Remember when you couldn’t walk into a newsagent without seeing his mug on every magazine, on every shelf; his signature on the side of small kitchen electricals; and his dulcet ‘barrow-boy’ tones as a voice over to Sainsbury’s advertisements sandwiched between episodes of your favourite tv show.  We loved him.  We loved everything about him; his youth, his unpatronising manner; his sheer enthusiasm for all things good and his boundless energy determined to put things right in our ‘fast-food nation’.  Unfortunately, where Jamie is concerned, we realised that it is possible to have too much of a good thing.  He went quiet.  And then he came back… with a TED award and a seemingly boundless determination to rid the globe of bad food.  Bring it on Jamie.

Having too much of a good thing could also now be said about macaroons.  Looking for a cupcake replacement, the small baked goods and confectionary departments of the world have been wracking their brains for a temporary replacement.  And they have come up with Macaroons.  A Parisian delight, begging to be quaffed with an espresso or even a long latte, the macaroon fulfills the same cute, perfectly formed, prettily coloured requirements of shop shelves and cake shop windows.  However, it is not so easy to make, has an equally fleeting shelf life if made at home, and also has the fear of becoming “so last season” if it continues to be created in the classically nauseating/fake pretty spring colours.

When I think of Macaroons or “Les Macarons” as my grandmother would correct me (always call an item by its indigenous moniker), I think of Parisian 40’s housewives.  I can’t help it.  I can call to mind those fabulous colour washed plates in battered and tea stained books from my grandmothers’ bookshelves; tainted from years of  languishing above the yellow aga, squashed between the Marguerite Patten and Mrs Beeton, only to be brought down occasionally to amuse me.  She couldn’t possibly cook from them…they were so passé. 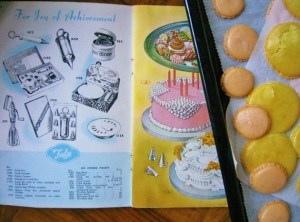 3 egg whites (free range organic and not too big)

These dainty little hamburger shaped morsels are divine just as they are, but you can add various essences and colours to create the pretty tones and subtle flavours they have become famous for. I always prefer natural additions such as lime, lemon or orange zest and juice, or rose syrup or raspberry juice for pink ones.  Some more grown up flavours that work well include a tsp of dried instant coffee granules added to the ground almonds, with nutella or chocolate ganache filling.  Replace the almonds with peeled ground pistachios or hazelnuts in the meringue and combine with dark chocolate ganache for a heavenly combination. Saffron or cardamom are also delicate and very grown up additions to a plain almond meringue – again working beautifully with a valrhona or similar 70%+ ganache filling.  How about a Mont Blanc version with chesnut puree instead of ganache? Oh…and for pure chocolate ones; just replace half the icing sugar in the meringue with cocoa.

Don’t turn the oven on yet as it may take you a while to put these together the first time. Bring out your ingredients and allow them to reach room temperature.   Find two of your largest and flattest oven/baking trays and cut baking parchment to exactly fit in the bottom. Get piping bags ready; you will need one for each colour with a plain medium sized tip.  Alternatively you can use Ziploc or sandwich bags and cut off a corner at the bottom just less than a cm wide.

Place icing sugar and almonds in a food processor and blitz for a minute or two, ensuring they are well combined and very fine (add coffee granules, cardamom, or cocoa if using at this point).  Sift mixture into a bowl – resist the temptation to push bits through as you may have up to a teaspoon left behind.  Place the egg whites, a tablespoon of the caster sugar and a small pinch of salt in an immaculately clean metal bowl (wipe down with paper towel dipped in a little vinegar if you want to be sure).  Beat egg white until it begins to form soft peaks and then slowly beat in the rest of the caster sugar until the mixture is smooth, glossy and thick, but not too firm.  Slowly cut and fold the icing sugar and almond mixture into the meringue mixture until just combined.  Split into separate bowls if you want to make more than one colour (you can fairly easily split this amount into two) and add tiny drops of colour and/or flavouring until you get the desired intensity.  Don’t worry too much about having to stir your colour in uniformly – the recipe is fairly robust and too much stirring shouldn’t affect it too badly.

Spoon the mixture into the piping bag and pipe circles of mixture onto your baking parchment about the size of a 50 pence piece, or shot glass circumference (remember they will spread a little).  If you are a true perfectionist you can draw the circles in pencil on the paper and pipe on the reverse side.  Bang the tray on a flat surface to release any excess air (you don’t want them to rise and have a hollow centre) and then, put them somewhere cool and dry and forget about them for a while as you make the filling and preheat the oven.

Turn on the oven to 140C if fan assisted or 160C if not – though results may well not be as good and you will have to watch them closely during cooking.

Beat butter until soft and then add icing sugar a spoon at a time.  When combined, beat until light and fluffy.  Split your filling between bowls again to colour and flavour if doing more than one type and then check your macaroons.  They will be ready to put into the oven when they have formed a slight skin – you will be able to touch them without ending up with mixture on your finger.  This can take up to an hour.

When ready put in oven for about 12/15 minutes ensuring that the shell is crisp but not turning brown.

Allow to cool on the trays, remove carefully, and then stick them together using the filling, squashing slightly between flat palms so it begins to ooze.  Serve/eat as soon as possible with a good strong cup of coffee.